November 10, 2016
Following completion of the SLAE32 course (http://www.securitytube-training.com/online-courses/securitytube-linux-assembly-expert/index.html), I decided to take advantage of the Pentester Academy account we have at work to continue the training with SLAE64 (http://www.securitytube-training.com/online-courses/x8664-assembly-and-shellcoding-on-linux/index.html). So, we'll delve into each assignment like we did before and because it's part of the certification challenge.

Assignment 1 requirements are as follows:

If you've read my previous blog posts on SLAE32 certification challenge you might be thinking, this should be easy. I could just copy/paste my previous code right? I thought the same thing until I started taking this course. There are actually some pretty big differences and along the same lines at least a few similarities. Let's talk about the differences first.

In x86_64 assembly, RAX is used for the system call number and resultant return value. For the arguments of the system call, RDI, RSI, RDX, R10, R8, and R9 are used in that order. So, there's plenty of room. System calls are also called by giving the SYSCALL instruction instead of the INT 0x80 interrupt code. Finally, in x86_64 assembly, you can make a #define __NR_socket 41 system call directly, without invoking define __NR_socketcall 102 first.

Now that we have that out of the way, let's jump into the code. We'll start this script like before defining a global starting point with global _start. Following this, we declare our .text section and create our starting point label. In order to avoid NULL bytes, we'll initialize RAX with an XOR with itself and then copy 0x29 which is the system call number for SOCKET. After this, we'll set up our arguments to SOCKET: 0x2 = AF_INET, 0x1 = SOCK_STREAM, and 0x6 = TCP. This information can be found in the following places:
Finally, we issue the syscall instruction to create our socket. Once that is finished, we'll move our SOCKFD return value from RAX to RDI.


The next part of the code binds our socket to listen on 0.0.0.0:4444. We'll start by initializing RAX again with an XOR instruction. We'll do the same with EDX and then copy 0x10 into DL as our third argument to our BIND system call. The next set of instructions set up the stack which will be used as our second argument. In order to use this setup though, we'll have to adjust the stack after our MOV instructions and then copy the address of the top of the stack into RSI. Once our registers are setup, don't forget RDI is set up already thanks to the last instruction in the previous block of code, we'll issue the syscall instruction to execute the system call.


Great, our socket is setup, and it's bound. Next up is to have it listen and then accept connections. We'll cover both now. The listen system call is pretty straight forward. We initialize RAX and then copy 0x32 into AL. RDI still holds our SOCKFD so we don't have to worry about that. RSI is initialized with an XOR instruction and then increased by one with the INC instruction. With our registers setup, we issue the syscall insruction. Once our socket is listening, we need to have it accept connections with the define __NR_accept 43 system call. Initialize RAX to zero with an XOR instruction, push its value onto the stack, and then copy our system call number into AL. All of this helps us avoid NULL bytes in our resulting shellcode. Next, we setup RSI by pushing the address to the top of our stack into it. It really doesn't matter what we have in argument two for this situation so we just need a pointer to a NULL byte without introducing a NULL byte into our shellcode. Our address is 16 bytes long so we push 0x10 onto the stack and copy the new stack pointer into RDX and then execute our syscall instruction. The rest of the instructions make sure we hold onto our SOCKFD just in case into R15, and then we move our ACCEPTFD into RDI and then store it again into R9. This probably isn't necessary and I'm being overly cautious.


Excellent, with our socket setup, we'll begin to setup the password requirement. The first set of instructions sets up register R14 to push a NULL byte onto the stack and then our password H4xx0r01. We have to put this into a register first before pushing it onto the stack because the PUSH instruction can ONLY push a q-word onto the stack if it's in a register. I learned this the hard way after a lot of segfaults and a lot of reading the Intel manual. Once the stack is setup, we move the stack pointer into R14 because we'll need it later for our comparison. We finish this block by adding 0x10 bytes to our stack address. This will help make sure we don't accidentally overwrite our password just in case. The next block of code redirects our ACCEPTFD to standard in, out, and error. We'll initialize RAX again and will use the INC instruction to get RSI setup for each system call. Remember, RDI holds are ACCEPTFD which we will use as our first argument to the define __NR_dup2 33 system call.


This next block of code begins our password prompt. I definitely got a little more fancy than necessary but that's only because I wanted to challenge myself a bit more. This first block uses the define __NR_write 1 system call to pass a faux prompt to the end user asking for a password. We need to push our string onto the stack in reverse order to follow little endian format.


Next up, we the define __NR_read 0 system call to read in 16 bytes passed through standard in via the socket. Once 16 bytes are passed, we will need to check the value entered. This is what we do in the block of code with the passwordcheck: label. I chose to use CMPSQ which requires addresses to our comparison values in RDI, and RSI. SCASQ could've also been used but would have required us to use RAX with RDI. If the password matches, we jump short to our shelltime: label. If it doesn't match (ZF not set), we jump back to our passprompt: label and send our faux prompt through the socket again.

Finally, when the correct password is sent, we call define __NR_execve 59 system call to launch /bin//sh -i. If you've ready any of my SLAE32 blog posts, you know I'm a fan of some sort of indication we have a prompt. In a real situation this would just bloat our shellcode and would need to be made more efficient. One thing to notice, is that we can push hs//nib/ onto the stack all at once from RDI. This is a benefit of x86_64 assembly with the larger registers.


Here's our shellcode.
And now we run it to make sure it works. While 310 bytes isn't horrible, I wouldn't use such a bloated script in a real penetration assessment. I like the password protection scheme though so might edit this to reduce its size a bit at a later time. 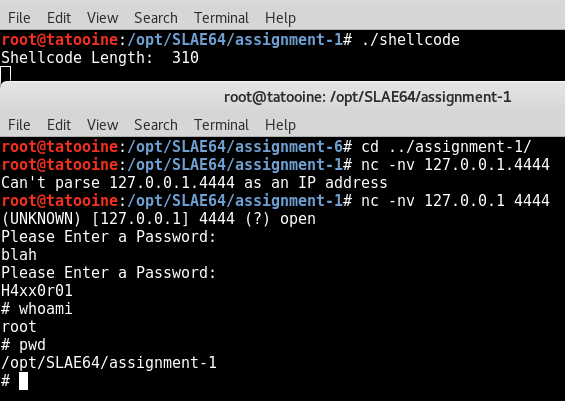 For the next part of the assignment we were tasked with changing Vivek's BindShell.nasm from the course so that it didn't have any NULL bytes. The original code can be found here: https://github.com/blu3gl0w13/SLAE64/blob/master/assignment-1/BindShell.nasm

Below is the adjusted BindShell-adjusted.nasm.


So how did we do? Let's check the shellcode output. For this, we'll use some scripts I developed during the SLAE32 class found here: https://github.com/blu3gl0w13/SLAE64/tree/master/scripts. Looks like we don't have any NULL bytes. Great!
This blog post has been created for completing the requirements of the SecurityTube Linux Assembly Expert 64-bit certification: