October 02, 2016
In preparation for the next Offensive Security certification class and challenge (CTP and OSCE), I decided to invest some time and energy into the Security Tube Linux Assembly Expert 32-bit class. That way I can have a solid foundation in understanding the finer workings of Assembly. Especially since my focus for my second Bachelor's degree was more along the lines of system administration and back-end web development instead of the programming focus of Computer Science. Still, I never stop with my learning and barely slow down at times.

This was the first assignment out of seven (7) and the requirements for assignment one (1) were as follows:


This is a pretty standard request but I must admit the process was only somewhat familiar. I knew I could write the code pretty easily once I understood the process. For this, I had to fall back on my love for Python to understand what needed to be done. I also relied heavily on man pages along with several of the following header files.


From my knowledge of Python, I knew I had to use Assembly to perform the following tasks:


From the get go, I set out to code as many assignments as I could using the assembly knowledge learned from the course. I did this purposely because I wanted to be sure I could actually write assembly and dump the shellcode by hand, especially since freely available tools that generate shellcode have well known signatures that get picked up by Antivirus or Intrusion Detection/Prevention systems.


The full script can be found here:
https://github.com/blu3gl0w13/SLAE32/blob/master/assignment-1/bind-shell-bash.nasm

Supplemental scripts that I developed for this class can be found on GitHub at the following location: https://github.com/blu3gl0w13/SLAE32/tree/master/scripts

Like any .nasm script, we'll need to make some declarations. In this specific script, we'll communicate to the linker and compiler that we're going to use _start as our script starting point. We'll also define our .text section and the first block of code under _start:.


We then initialize our EAX, EBX, and ECX registers using the XOR instruction. The idea here is that we need to avoid a NULL (0x00) byte at all costs or otherwise risk our script not running properly. This is due to the fact a NULL byte is used to terminate strings. So, if any NULL bytes make it into our assembly program, we will run into issues when it comes time to execute the program. One thing to remember here is that any value XOR with itself will always be 0x00. That's why we use the XOR instruction to initialize our registers. 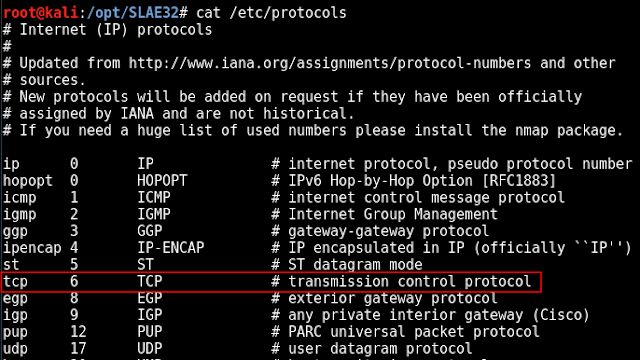 If we run man 2 socket in a terminal we can get the values for the last two push instructions. Notice in the image below that SOCK_STREAM is the first option (near the bottom of the image) for the type of socket we need to create. We want to choose SOCK_STREAM because we want to use the TCP protocol. We also choose AF_INET because we want to use bind to an IPv4 address (0.0.0.0). 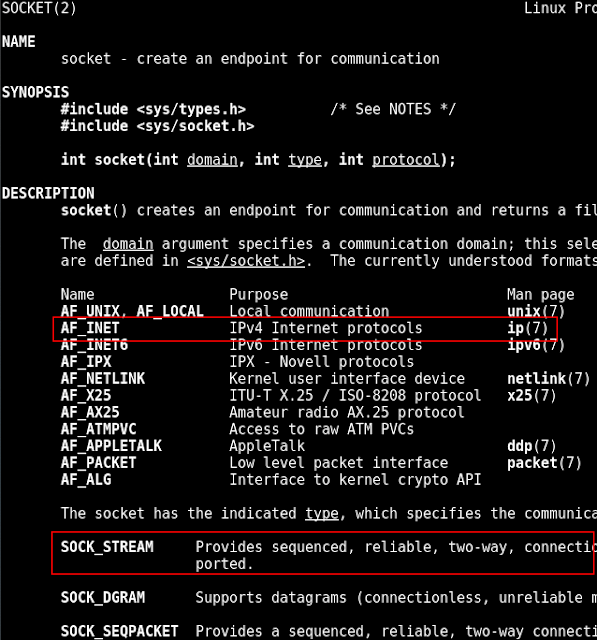 So why do we push these onto the stack in what appears to be backwards order? The answer is simple! The stack operates on a Last In First Out (LIFO) basis. That means if we want to call our parameters in the correct order, we'll push them onto the stack in reverse order so that when we POP them off of the stack, or in our case when the pointer is called, the parameters will execute in the correct order. Moving along we come across our next set of instructions. In order to figure out what our SOCKETCALL system call is, we'll look in /usr/include/i386-linux-gnu/asm/unistd_32.h (your location may differ slightly depending upon your distribution of Linux). 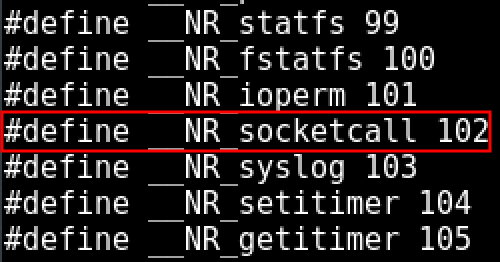 Great, we see that system call number 102 is our SOCKETCALL which in hexadecimal is 0x66. We move this into al which is an 8-bit register within EAX. Next, we copy 0x1 (SOCKET) into bl and move the pointer to our SOCKET parameters into ECX. Finally we send the interrupt 0x80 signal and create our socket. If it succeeds, we'll get a positive integer returned if the socket is created successfully. Since we'll need this return value for BIND, LISTEN, and ACCEPT, we'll have to store it in a different register. For this, we'll use EDI.


Our next bit of code starts a JMP-CALL-POP technique. This will short jump to our portconfig label. Once we short jump into portconfig, we call call_bind. When we make the call, EIP will contain the address to the portnum dw 0x5c11 instruction, and this will get pushed onto the stack.


The first instruction in our call_bind pops the address to our portnum dw 0x5c11 instruction into ESI. We now have the address of this instruction in a register and can use it in our BIND system call. This technique works well because hard coding any address into our program means our program may not work each time we execute it, plus we run the risk of the program not working on other flavors of Linux. In this block of code, it's important to notice we'll need our SOCKETFD from our SOCKET system call.


Our next section uses SOCKETCALL to call LISTEN. We'll need to use our original SOCKETFD again so that we listen on the original socket. This block follows a similar process as the socket and bind blocks.


I'll group the next two blocks of code together because they relate to each other as the second block requires the return value from the first block. Once we have our socket bound and listening, we'll need to accept connections to the socket. A quick review of the man 2 accept shows us what's needed for the ACCEPT system call.

Right of way we notice that int accept(int sockfd, struct sockaddr *addr, socklen_t *addrlen) takes our socketfd from our original socket system call, and then a struct including an address, and finally addrlen indicating that if we use an actual IP address to accept connections on, we'll need to calculate how long that address is in bytes. However, as you can see in my verbose comments in the code below, there is an important detail with ACCEPT. If our address is NULL then our addrlen must also be NULL. This works well since we'll listen on all interfaces 0.0.0.0. We will call ACCEPT much like the rest of our socket using the SOCKETCALL system call with the ACCEPT system call. Once our registers are set up, we'll use the interrupt signal to execute. The return value for this system call will get stored in EAX. The next set of instructions calls the DUP2 system call to redirect our ACCEPTFD to standard in, out, and error. This allows us to interact with the socket directly from a shell program. We'll launch this shell program next once we send the interrupt signal and execute the DUP2 system call.


At this point in the program's execution, our socket is set up, it is bound, it is listening on port 4444/TCP, and accepting connections on 0.0.0.0. It is now time we call EXECVE to run /bin////bash -i. One might ask why I decided to use the -i option with /bin/bash. This is a personal preference really. It definitely adds a few more bytes to the length of the shell code and if we are aiming for the smallest shell code size possible, this will not win any awards. What this will do, however, is allow us to have a visual cue when we connect with NETCAT because the -i option means that /bin/bash will run as an interactive shell.


One important part of this code is to point out how we setup the stack for our -i option to /bin/bash. If we look carefully at EXECVE we see that the second parameter is a pointer to the ARGV[] array. The below image shows how our stack is setup to make sure we have the correct setup for the second parameter to EXECVE which will get stored in the ECX register. 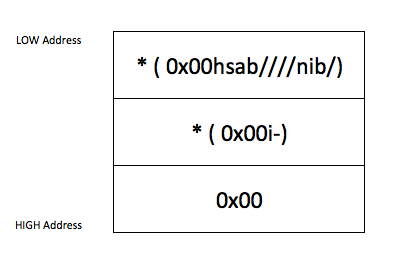 As we run the compiled version, we connect to port 4444/TCP using NETCAT and receive a shell. 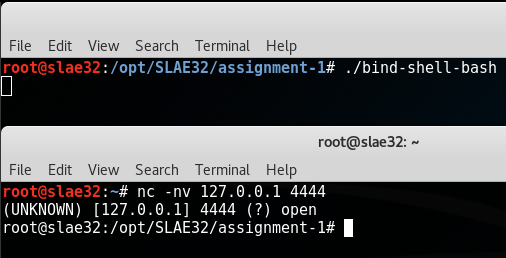 Excellent, our program works as expected. For those interested, here's how long our shellcode is in bytes. 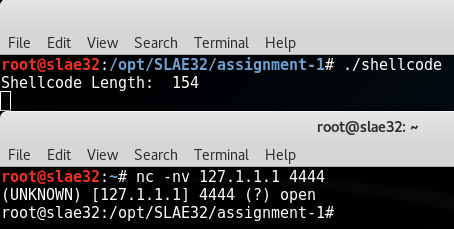 Finally, here is the actual shellcode. The last two (2) bytes are the port making it easily configurable. I wrote a python script iptohex.pyto help with the task of converting a port and IP address into hex in little endian (https://github.com/blu3gl0w13/SLAE32/blob/master/scripts/iptohex.py). You may notice that the port 4444 in hex is 0x115c. The reason it is like this in the shellcode output is because I used the little endian format within the assembly code itself.


Thank you for reading this blog! I hope you actually learned something and can use this information to better your knowledge of shellcode and 32-bit assembly on Linux. I highly recommend you give the SLAE32 course a try. Full details can be found below.

This blog post has been created for completing the requirements of the SecurityTube Linux Assembly Expert certification:
http://securitytube-training.com/online-courses/securitytube-linux-assembly-expert/